Above: IAEA Director General Rafael Mariano Grossi waves to international press and media during his press briefing as he points to a map of the situation at Ukraine’s Zaporizhzhia nuclear power plant. IAEA Vienna, Austria. March 4, 2022.

The euro-to-dollar exchange rate fell one percent on Friday and analysts say it could drop significantly amid a significant deterioration in the conflict in Ukraine.

Stocks and the euro were undervalued while the dollar and commodities were bought following reports of a fire at Europe’s largest nuclear power plant in the early hours of Friday morning.

“Global risk assets and the euro continued to slide as further events unfolded in Ukraine,” said Stephen Gallo, head of European currency strategy at BMO Capital. “The nuclear aspect of the latest events in Ukraine is likely fueling fears of massive civilian casualties, which would put further pressure on Western governments to suspend imports of Russian fossil fuels.”

Ukraine said the fire was started during a Russian offensive to take the key piece of infrastructure and served as a reminder of the incredibly serious nature of the conflict.

Analysts say further losses in the single eurozone currency are likely as long as Russian President Vladimir Putin continues his run for destruction.

US Secretary of State Anthony Blinken has warned that the threat of an escalation into wider conflict is now very real.

“Ours is a defensive alliance. We are not looking for conflict. But if conflict does arise, we are ready for it and we will defend every inch of NATO territory,” Blinken told reporters.

The euro-dollar exchange rate fell below the psychologically significant level of 1.10 following the news of the fire at the Zaporizhzhia power plant.

“Amid the ongoing war in Ukraine, the US dollar has generally strengthened; the DXY index, for example, hit its highest level since June 2020,” said Jonathan Petersen, an analyst at Capital Economics. 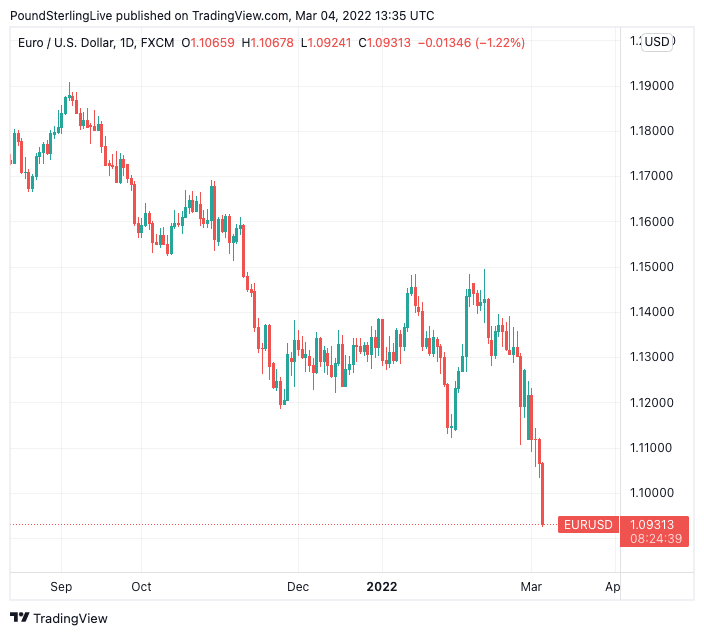 The eurozone economy and the wider European Union are set to take a hit to growth and soaring inflation due to its geographical proximity to the theater of conflict, as well as its deeply integrated energy ties .

“The rapid and widespread rise in commodity prices has caused substantial changes in countries’ terms of trade. In addition to closer economic ties with Russia, most European countries are net importers of raw materials, so some of the weakness in their currencies likely reflects deteriorating terms of trade,” Petersen says.

The deteriorating economic outlook for the euro zone will likely inject a dose of caution into upcoming policy decisions by the European Central Bank (ECB), with economists saying the Governing Council will almost certainly delay plans to “normalize” policy.

“Because the potential impact of war on real economic growth in the latter is greater in Europe, we believe the ECB may need to delay or slow the pace of monetary policy tightening,” Petersen said.

ING Bank NV analysis finds that the war in Ukraine would slow the pace of Eurozone recovery and push inflation to around 4% for the year.

As a result, ING economists believe the European Central Bank will find it harder to weather the storm, although they still expect quantitative easing to end in the third quarter and an initial rate hike around the end of the year.

“It’s hard to imagine the ECB wanting to start normalizing monetary policy at such a time of uncertainty,” said Carsten Brzeski, Global Head of Macro at ING. 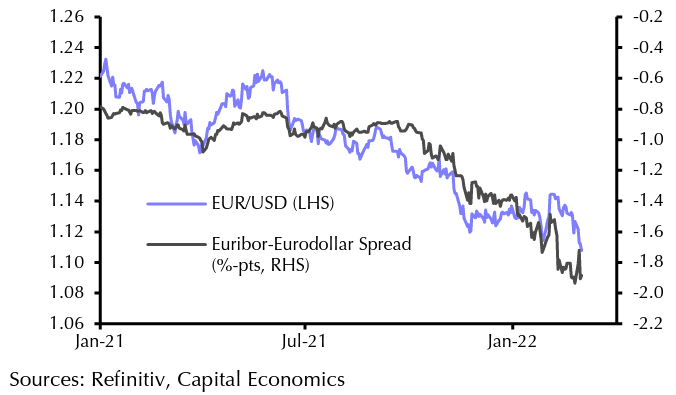 “But in the United States, policy tightening is expected to continue as expected; indeed, Fed Chairman Powell indicated yesterday in testimony to Congress that the central bank would “act cautiously” in tightening. policy this year. As a result, the short-term gap – forward rate expectations between the US and the eurozone have shifted further in favor of the dollar in recent weeks,” Petersen says.

These developments pose further downside risks to the euro.

“The war in Europe has understandably taken its toll on currencies in the region and the implementation of Russian sanctions now calls into question the deliverability of the rouble. Pressure is building for a major EUR/USD break below 1 .10 this spring,” Brzeski said.

Capital Economics tells its clients that unless the war ends quickly, the decline in European currencies is likely to persist.

“We believe downside risks to European currencies have increased; for example, the euro could weaken well below our current forecast of 1.10 against the dollar,” Petersen said.

Higher inflation and slower growth risk creating a stagflationary environment that is less compatible with a hawkish central bank hike than would be the case in an environment where price increases are fueled by stronger inflation. economy and higher wages.

“Given the risks to Germany’s gas and oil supply, the euro could find itself suffocated by a fresh wave of growth risks and potentially heightened concerns about stagflation,” said Jane Foley. , senior FX strategist at Rabobank.