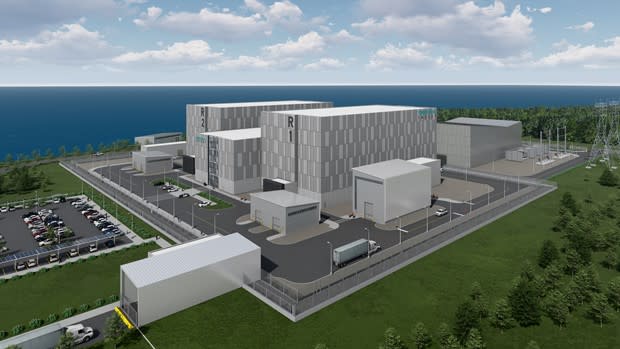 Render of the IMSR400 power plant

Illustration of the IMSR400 plant in the configuration proposed for the Darlington site. The IMSR400 has the capacity to generate 390 MW (net) of clean, reliable and carbon-free electrical power on a 7 hectare site.

OAKVILLE, Ontario, Sep 14, 2021 (GLOBE NEWSWIRE) – Terrestrial Energy today announced the design of its upgraded molten salt integrated reactor (IMSR) nuclear power plant – the IMSR400 – a facility with a net capacity of production of 390 MW of electricity to feed the grid from twin reactors and generators. This upgrade, in response to utility demands, further increases the cost competitiveness of the IMSR400 as a clean, safe and reliable source of power.

“With our upgraded Generation IV IMSR400 nuclear power plant, Terrestrial Energy is raising the bar for innovative carbon-free technology in terms of cost competitiveness, resilience and scalability,” said Simon Irish, CEO of Terrestrial Energy. “The IMSR400 has the efficiency, economy and flexibility to play a major role in the clean energy transition, including the production of clean hydrogen on an industrial scale. “

The technological class of Generation IV reactors was defined in 2001 by the Generation IV International Forum (GIF), an agency created by international treaty and supervised by the Organization for Economic Co-operation and Development (OECD), including Canada and the United States was a founding signatory. . GIF has identified six Generation IV reactor technologies – including the molten salt reactor – that offer improvements in cost, safety, versatility and waste, and embody the future of civilian nuclear power generation. .

“With the commercial development of the IMSR Power Plant, we are delivering on the revolutionary promise of Generation IV technology presented by GIF 20 years ago,” said Mr. Irish.

Since early 2016, when it became the first developer of Generation IV reactors to submit a power plant design to the Canadian Nuclear Safety Commission (CNSC), Terrestrial Energy has been engaged in the review process of the design of CNSC suppliers. It completed Phase 1 in 2017 and plans to complete Phase 2 by early 2022. Since late 2019, the company has also worked with the CNSC and the US Nuclear Regulatory Commission (NRC) , as the two regulators work together to develop licensing practices to support effective reviews of Generation IV nuclear power plants.

The IMSR400 uses standard enrichment nuclear fuel – the only Generation IV SMR power plant designed to do so today. This avoids the considerable cost and time of re-licensing uranium enrichment plants and removes barriers to commercialization, thereby accelerating deployment. The company announced on August 17 an agreement with Westinghouse and the UK’s National Nuclear Laboratory to provide nuclear fuel supplies for the IMSR, the first Generation IV small modular reactor (SMR) to have such an agreement.

An image accompanying this announcement is available at https://www.globenewswire.com/NewsRoom/AttachmentNg/0d480bf6-81bd-4cb6-a84f-f138c7fbb302

Terrestrial Energy is a developer of small modular nuclear power plants that use its proprietary integral molten salt reactor (IMSR) technology. IMSR technology is not light water and Generation IV reactor technology and will generate electricity 50% more efficiently than conventional nuclear reactor technology. The IMSR represents a radical improvement in the economics, versatility and functionality of nuclear power plants that is only possible with Generation IV technology. IMSR plants will provide resilient, reliable, distributable, carbon-free and competitively priced electrical power as well as high quality process heat for use in many industrial applications, such as chemical synthesis, hydrogen production and desalination, thereby extending the application of nuclear energy well beyond electricity markets. IMSR plants have the potential to make important contributions to industrial competitiveness, energy security and economic growth. Their deployment will support the rapid global decarbonization of the primary energy system by shifting the burning of fossil fuels across a broad spectrum and can scale to meet the net zero policy goals of major industrial economies. Using innovative design and proven and proven molten salt reactor technology, Terrestrial Energy engaged with regulators and industrial partners to complete IMSR engineering and commission the first IMSR plants in the late 2020s. .