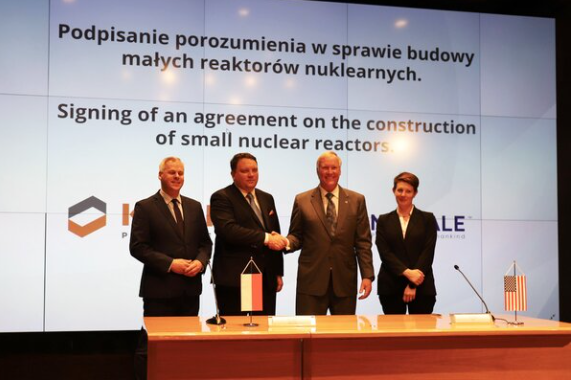 NuScale says in a press release that it will support KGHM in implementing SMR technology to replace existing coal-based energy sources. This clean energy is expected to power the copper company’s production plants. This cooperation concerns the development and construction of 4 small modular nuclear reactors (SMR), with the option of up to 12 (with an installed capacity of around 1 GW). It will potentially be the largest such facility in the world. Project completion is expected by the end of 2030.

In accordance with its signed commitment, KGHM Polska Miedź will not only receive the final product, but will also actively participate in the development of this technology.

Want to be inspired 365 days a year? Here is the opportunity. We offer you one “origin of innovation” per day in a compact Telegram message. Seven days a week, delivered around 8:00 p.m. CET. Direct from our newsroom. Subscribe here, it’s free!

The strategy put forward by KGHM states that by 2030, half of the company’s electricity needs will be supplied from its own internal sources, including RES. KGHM Polska Miedź is advancing projects for the construction of photovoltaic power plants on the site of its facilities, has signed an agreement to develop offshore wind farms in Poland and now adds energy from small nuclear reactors to this mix.

NuScale’s scalable design (power plants that can accommodate up to four, six or 12 individual power modules) delivers the benefits of carbon-free power and reduces the financial liabilities associated with gigawatt-sized nuclear facilities. The majority investor in NuScale is Fluor Corporation, a global engineering, procurement and construction company with a 70-year history in commercial nuclear power.

KGHM is involved in the extraction and processing of valuable natural resources. At its heart is the largest deposit of copper ore in Europe, located in southwestern Poland. It is present on three continents – in Europe, North America and South America. The copper ore resources controlled by KGHM ensure the company a leading position in the mining industry.