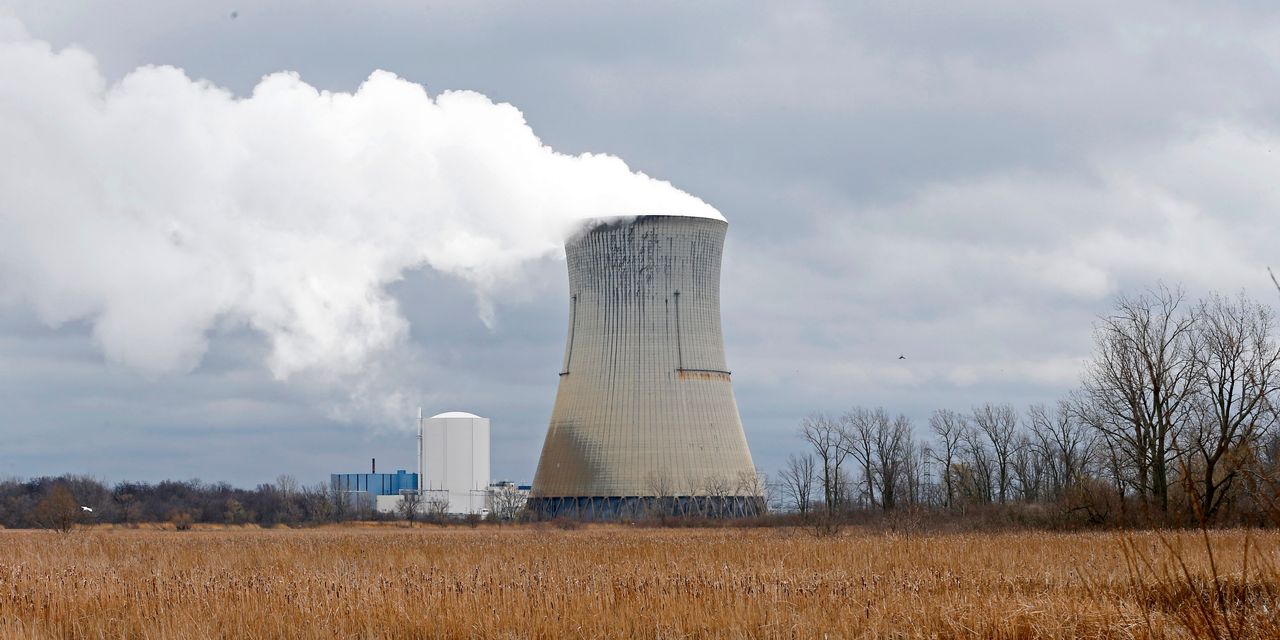 Bitcoin miners, criticized for their sizable environmental footprint, are partnering with struggling nuclear power plant owners with electricity to spare.

Talen Energy Corp. has entered into a joint venture with bitcoin mining company TeraWulf Inc., which has begun land development for a mining facility the size of four football fields next to its Pennsylvania nuclear power plant. The nuclear generator Energy Harbor Corp. will supply electricity to a Standard Power mining center in Ohio starting in December.

“We are creating demand adjacent to the existing nuclear power plant,” said Alex Hernandez, president of Talen Energy, who heads the subsidiary jointly developing the mining project near the Susquehanna steam power station.

“The challenges of both sectors are the positives of the other sector,” said Sean Lawrie, partner at consulting firm ScottMadden Inc.

Mining bitcoin is an energy intensive process. To unlock more currency, miners must solve increasingly complex math puzzles, which means they require more computing power and electricity. Ten years ago, mining only required one person with a PC, but rising bitcoin prices and a limited supply have created a race. The way to increase the chances of solving the puzzle is to put more machines to work.

“At the heart of bitcoin mining is energy and energy infrastructure,” said Paul Prager, CEO of TeraWulf.

The boom in large mining operations has fueled criticism from environmentalists and others that the increasing use of electricity from fossil fuels for cryptocurrency could waste resources and worsen climate change. A tweet from Tesla Inc. CEO Elon Musk expressing concern about the environmental impact of mining operations briefly caused bitcoin prices to drop in May.

Nuclear power, meanwhile, fell out of favor with the public following accidents such as the Fukushima disaster in Japan in 2011 and struggled to compete economically in the United States.

Nuclear power plants provide a stable source of emission-free electricity, but like coal-fired power plants, many face a daunting challenge in selling their output in wholesale electricity markets amidst stiff competition from the world. wind and solar power and natural gas production, which has become cheaper. after the fracking boom led to huge new fuel discoveries.

“They are still making money because they are still running, but it is very difficult for them in today’s electricity markets to get a fair return on their maintenance investments,” said Travis Miller, energy strategist and utilities for Morningstar.

Many nuclear power plants have been shut down in the United States in recent years, including the Indian Point facility outside New York City, formerly owned by Entergy Corp. With pensions likely to overtake new projects, nuclear power is set to decline in the US electricity mix in the coming years, according to the Energy Information Administration.

announced in June that it would shut down two of three nuclear power plants in Illinois that failed to sell their electricity in the latest wholesale electricity auction for PJM Interconnection, which operates a market serving 13 states and Washington, DC This led state lawmakers to approve a month-long bailout to keep the plants running.

The Susquehanna plant in Talen also had fewer megawatts for the same PJM auction as the previous one in 2018. The outlook for Talen’s subsidiary, Talen Energy Supply LLC, has been revised to negative by Fitch Ratings and Moody’s Investors Service. The result will be a drop in auction revenue of $ 209 million over 2022 and 2023, according to Fitch.

“We find ourselves in a place where electricity markets continue to be surplus and, in general, with a few exceptions, quite weak,” said Hernandez, chairman of Talen. The company sees the installation of bitcoin as the key to building a carbon-free digital infrastructure business, he added. It is also planning a data center next to Susquehanna and said on Tuesday it has secured an additional $ 175 million in capital for the projects.

While more nuclear-bitcoin reconciliations are expected, they are unlikely to be large enough or happen quickly enough to save nuclear power plants on the brink of shutdown, said Bill Dugan, director of Customized Energy Solutions, a security company. energy consulting. .

“A lot of them would have to be aggregated together,” Mr. Dugan said.

For bitcoin miners, partnerships allow them to promote projects as having an energy source that respects the environment.

“It was a big differentiator for us,” said Maxim Serezhin, managing director of Standard Power, which is building a nuclear-powered bitcoin mining facility at a former paper mill in Coshocton, Ohio. Standard Power’s official name is 500 N 4th Street LLC.

Select disruptive and corporate stories from energy markets and businesses, with news alerts emailed to you.

Compass Mining’s deal with start-up Oklo does not include a fixed price for electricity, but Whit Gibbs, chief executive of Compass, said he was confident the companies will agree on a price that allows profitable cryptocurrency mining.

Jacob DeWitte, co-founder and CEO of Oklo, said he has received inquiries from other bitcoin miners interested in the company’s 1.5 megawatt project using small modular reactors. However, that still requires federal government approval and is unlikely to happen for some time between 2023 and 2025, he said.

In Miami, Mayor Francis Suarez introduced his hometown as a destination for cryptocurrency miners, exchanges, and investment firms. Part of its pitch includes the nearby nuclear power plant owned by Florida Power & Light Co., a subsidiary of NextEra Energy. Inc.

Many environmental, social, and governance, or ESG, concerns about bitcoin mining “stem from the fact that a lot of mining was done in coal-producing countries,” Suarez said.

Discussions with Florida Power & Light officials focused on whether mining facilities could be located near the nuclear power plant and challenges such as the lack of cheap land to build large warehouses for mining equipment. , said Mr. Suarez.

Florida Power & Light declined to comment on the talks, but spokesperson Bill Orlove said South Florida has become a relocation destination for the tech industry. “We look forward to supporting the continued innovation and growth these companies bring,” said Mr. Orlove.

Write to Jennifer Hiller at jennifer.hiller@wsj.com