The Federal Nuclear Regulatory Authority (FANR) has announced the start of maintenance work on Unit 1 of the Barakah nuclear power plant.

The work, which includes regular nuclear refueling of the plant as well as testing of equipment used for safety-related systems and power generation among others, is currently in the skilled hands of Nawah Energy Company. The latter is a subsidiary of Korea Electric Power Corporation (KEPCO) and Emirates Nuclear Energy Corporation which is also responsible for the maintenance of units 1 to 4 of the Barakah nuclear power plant.

Maintenance work at Barakah Nuclear Power Plant Unit 1 is the result of FANR conducting its regulatory oversight activities to ensure that all activities are operating in accordance with FANR regulations. The authority would have put in place new additions of nuclear fuel assemblies and several other maintenance activities.

Once the resupply phase is complete, Unit 1 will return to full operation when it manages to gain FANR approval.

It consists of four Advanced Power Reactor (APR)-1400 nuclear reactors, two of which are already completed and operational and the rest are at an advanced stage of completion. The total capacity of the Barakah nuclear power plant is 5380 MW, which is intended to supply up to 25% of the UAE’s energy needs.

Nawah Energy Company, a joint venture created between ENEC and KEPCO in 2016, is responsible for the operation and maintenance of the nuclear power plant.

KHNP is also in charge of operations support services and cooperative activities, while KEPCO Engineering and Construction (KEPCO E&C) is the subcontractor providing the design, architecture and engineering works of the plant. . Doosan, on the other hand, was awarded the construction and management of the nuclear steam supply system (NSSS), steam generator and other related components.

Hyundai and Samsung are responsible for the civil works, while Westinghouse Electric Corporation provides technical support and licensing work. KNF will supply the nuclear fuel, which will be maintained by KPS.

Construction of the first unit began in July, ahead of its planned date at the end of this year, with the laying of the first nuclear safety concrete.

Construction of Unit 2 began in May.

ENEC installed the Unit 1 condenser in February and the first reactor vessel (RV) in May of the same year.

In September, construction of Unit 3 began.

In January, construction of the RCB concrete dome for Unit 1 was completed.

The first concrete pour for Unit 4 took place in September.

Financial close of the $24.4 billion nuclear power plant project was achieved in October. It should be noted that the project is 80% financed by debt and 20% by equity. The debt financing includes $16.2 billion in direct loan from the Abu Dhabi government and a $2.5 billion loan facility from the Korea Export-Import Bank (KEXIM).

In November, the main concreting and lifting works for Units 2, 3 and 4 were completed.

The loading of fuel into the first unit of the reactor was completed in March.

The second unit began supplying electricity to the country’s power grid in September of the same year. At the time, Units 3 and 4 were in the final stages of commissioning at 95% and 91% complete, respectively, with construction of the entire plant over 96% complete.

In October 2021Doosan Heavy Industries & Construction Co. has signed a maintenance service contract for a reactor at the Barakah nuclear power plant. 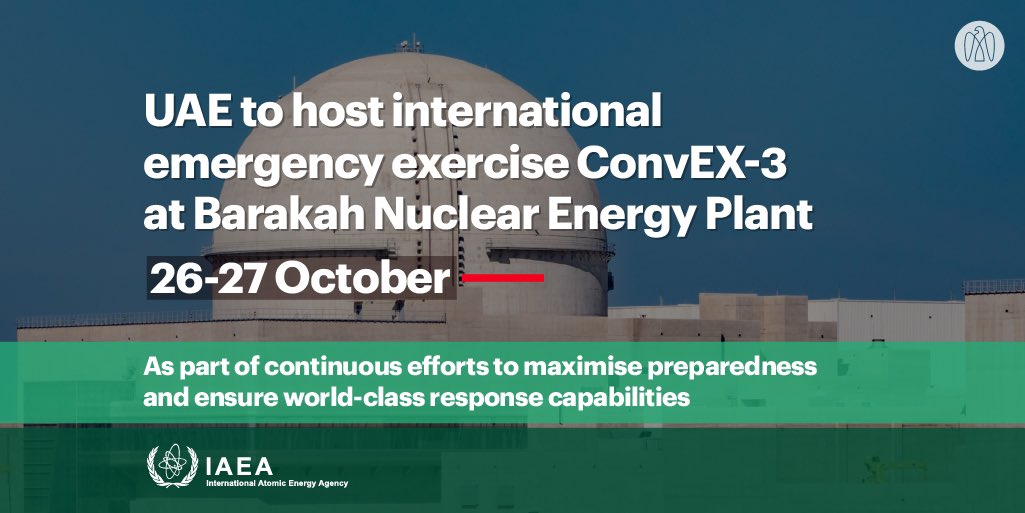 The exercise dubbed ConvEx-3 was organized by the International Atomic Energy Agency and would be implemented under the supervision of the UAE National Crisis and Disaster Management Authority (NCEMA), in accordance with legislative provisions. the UAE’s nuclear regulatory authority, the Federal Authority for Nuclear Regulation (FANR).

The aim is to ensure the UAE is fully prepared and to demonstrate its commitment to the highest international standards of safety, security and transparency.

In beginning of NovemberEmirates Nuclear Energy Corporation (ENEC) has announced the completion of the construction of the third reactor of the Barakah nuclear power plant.

According to ENEC, the unit was also handed over during the same period for operational readiness activities and was on track to start up and supply clean electricity in 2023. The unit in question joins the Unit 1, which is fully operational, and Unit 2, which is connected to the UAE National Grid and is being tested.

Unit 1 was commercially operational while Unit 2 was in the test phase in preparation for commercial operation and had reached 50% power by then. 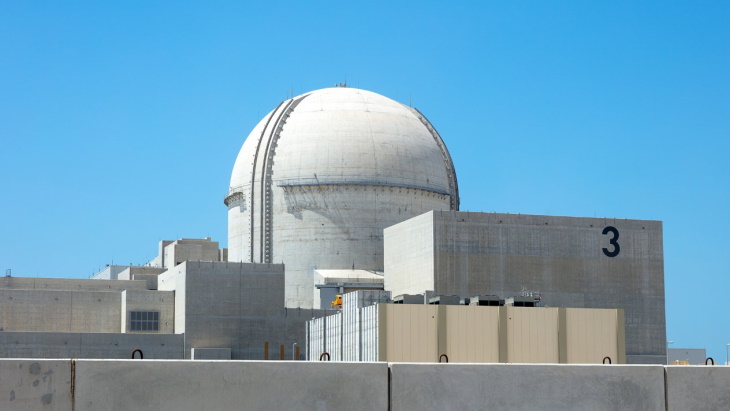 The operating license application for Unit 3, on the other hand where Emirates Nuclear Energy Corporation (ENEC) announced the completion of its construction last month (November 2021) was under review by the Authority Federal Nuclear Regulator (FANR) of the United Arab Emirates and would be issued when all regulatory requirements have been met.

ENEC (The Emirates Nuclear Energy Corporation) recently announced the start of commercial operations of the second unit 2 of the Barakah nuclear power plant. The new unit will contribute to the addition of more than 1,400 megawatts of electricity that contains no carbon emissions, bringing the total electricity production produced by units 1 and 2 to 2,800 megawatts.

This new step brings ENEC and all its subsidiaries closer to half of their capacity to meet their commitment to supply a quarter of the country’s electricity needs. In addition to supply, the company also aims to provide reliable electricity 24 hours a day, 7 days a week. Their efforts will also help improve the economy by being able to generate and supply electricity in a more consistent and efficient.

With the start of commercial operations of Unit 2, the Barakah nuclear power plant is already the first multi-unit plant currently present in the Arab world. This indeed makes the region the leader of the largest decarbonization initiative, being able to supply thousands and thousands of megawatts of carbon-free electricity daily.

ENEC CEO and Managing Director, Mohamed Ibrahim Al Hammadi, confidently stated that Barakah Nuclear Power Plant is the powerhouse of the United Arab Emirates. The start of the new Unit 2 commercial operations will keep the UAE power sector on track to achieve its Net Zero 2050 target.